Turning Digital - VII Edition : the TV Industry at the Crossroads 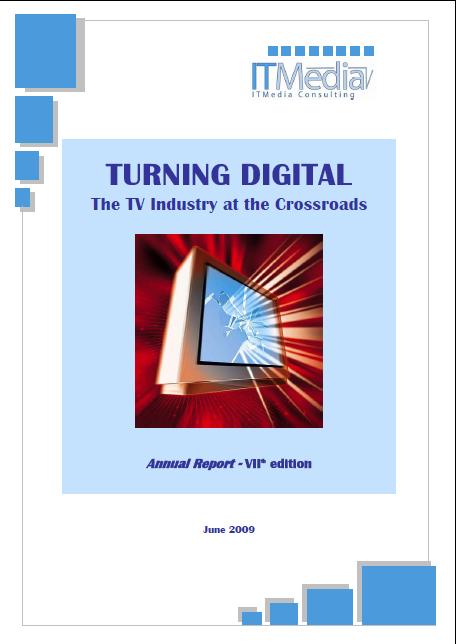 The fierce global financial crisis in 2008 triggered a real economic downturn in Europe. The TV sector was not immune to its effects, even though people started to increase the time spent at home rather than go out.
In 2008, the Western European television market grew by only 0.9% as a whole, against 4.7% in 2007. Advertising revenue recorded a decline for the first time in recent years, with a negative growth rate of 4.3%, while Pay TV has increased by 6.5%, although it has a lower growth rate compared the 9% of 2007. Internet is the only advertising medium that still maintained double-digit growth.
Multichannel television has been capturing audience share from mainstream television, accounting for 40.5% of the total TV market revenues. Despite the disappointing economic conditions, multichannel advertising was still registering a significant growth.
Moreover, Digital TV has penetrated to almost two-thirds of European households, which exceeded 100 million for the first time. Even though IPTV should remain a niche TV delivery platform, operators are expected to increasingly advertise the value-added services of their offers.
Nowadays, the economic downturn is intensifying the competitive pressure, but also bringing opportunities for further development. Traditional TV market players optimize resources to create cross-platform synergies, trying to attract new customers through the internet and high-definition television.
Internet provides an opportunity to develop the TV advertising market, and seize back the lost audience share in major TV channels through online video.
Finally, HDTV is being considered as another expansion opportunity for TV market players during the current financial downturn. Broadcasters are currently trying to close the gap between supply and demand of HD content.